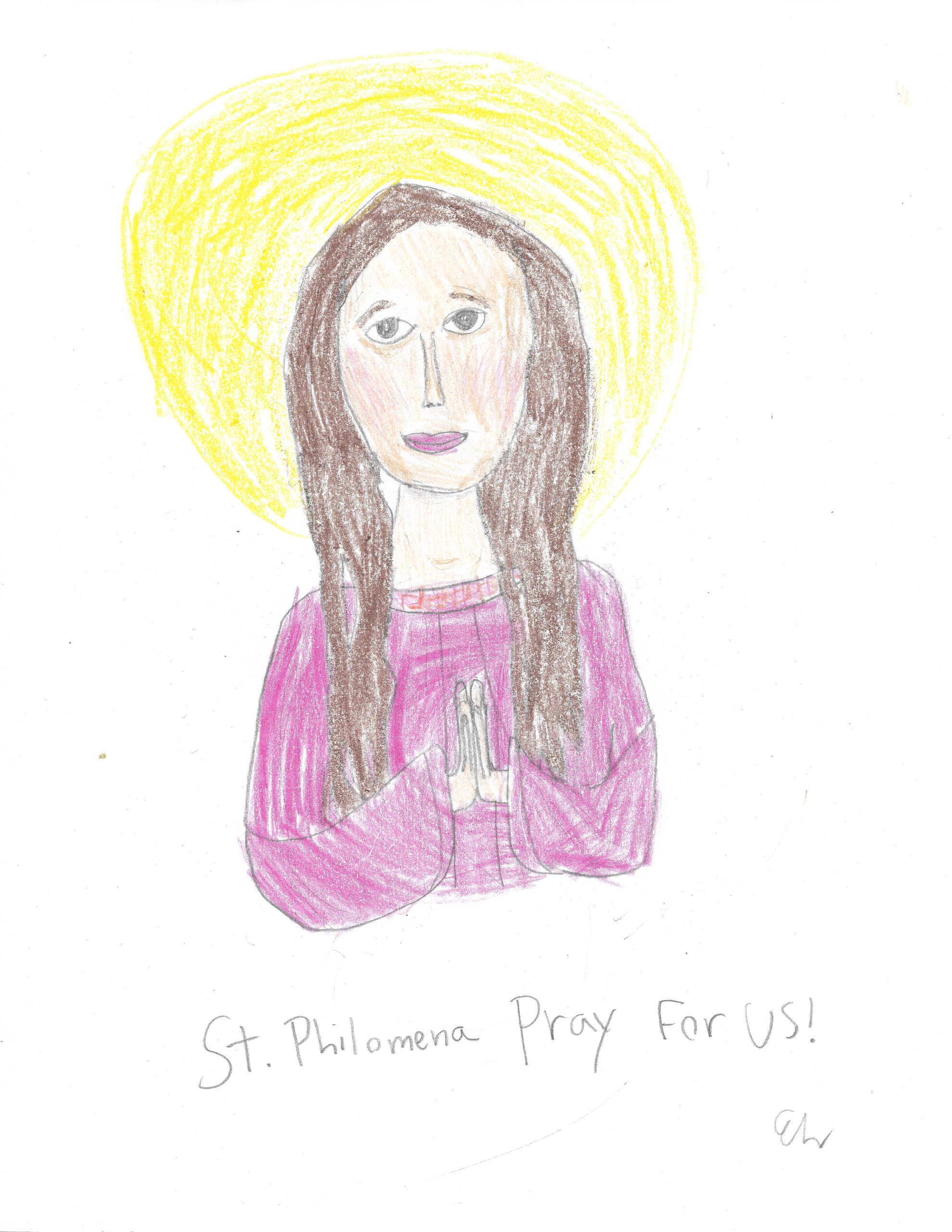 Lived her earthly pilgrimage from: early days of the Church (martyred at 14)

St. Philomena was the daughter of a prince. Both of her parents were pagan (worshipped many false gods) and without children. A doctor named Publius convinced them to be baptized. He told them if they would get baptized, he would pray for them. Then Philomena was born.

Philomena’s parents loved her so much they never left her. When she was 13, her parents took her to Rome. The emperor Diocletian fell in love with her. He offered her father riches if he would give her to him. Her father accepted.

Philomena did not want to marry him. She had made a promise to Jesus that her virginity belonged to Him.

Her parents begged her, but she stood strong in her virginity. Through all the emperor’s threats, she would not marry him. Diocletian locked her in a prison with chains.

After a few days, Diocletian loosened her chains. After 37 days in prison, Mary appeared to her with her Son in her arms. Mary said, “My daughter, three more days of prison and after 40 days you shall have no more pain.”

Philomena’s heart raced with joy but thought of the pain she would undergo.

Mary comforted her saying, “Have courage my daughter, are you unaware of my special love that I bear for you?”

Those words gave her courage.

Diocletian condemned her to be stripped and scourged.

The guards hesitated to unclothe her, but tied her to a pole and scourged her until the blood gushed. They dragged her into a dungeon, but two angels healed her.

Then Diocletian attempted to drown her, but angels delivered her. Diocletian was enraged and shot her with arrows and the blood gushed again.

She was brought back to her dungeon and fell into a sweet sleep. When she woke up she was healed, but the guards again shot at her with arrows. They did not hit her.

They shot fire arrows at her, but those turned around and killed six archers!

Finally, her head was chopped off and her pure soul flew straight up to heaven.

She died on Friday, during the three o’clock hour.

Good example to remember from the life of Saint Philomena: She held strong to her promise to Jesus.

Helpful Source: It is Time to Meet St. Philomena by Mark Miravalle